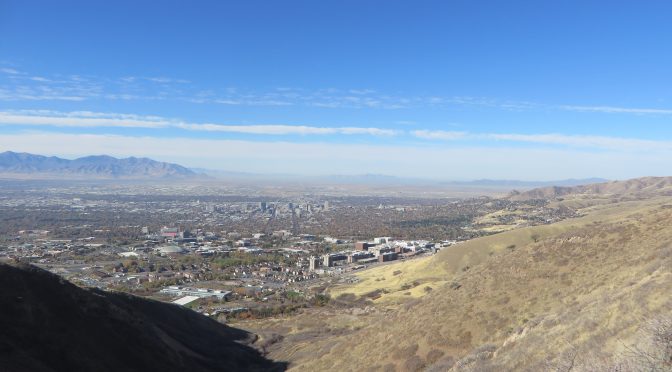 Over the years, we have waxed poetic about our love of combining hiking and beer.  Whether a trek in the Alps followed by beers at a hut or an urban beer hike in a big city, we enjoy the slow-paced journey provided by feet powered transportation.  We finally wedded the two on a quick trip to Salt Lake City, Utah. Introducing the Hike-n-Urban Beer Hike.

We probably could have done something similar on a previous trip but the thought never occurred to me. The light bulb moment came  when creating  a map for the trip, I placed a trail head pin near the cluster of downtown breweries targeted for our walking tour. Why not combine the two?

Salt Lake City is known for being a hikers paradise with many trails accessible from the downtown area. The trail head I had pinned was for the Living Room,  an out and back hike whose reward was a panoramic view of the Salt Lake Valley.

With five breweries to visit post hike, our goal was to be at our first brewery for a early afternoon lunch.  We set out mid morning under a bright blue sky and fall temperatures forecast to be in the mid 60s.

The trail head is located near the Natural History Museum of Utah. Beyond that, the trail wasn’t well marked, our only guide being the intuition to follow all the other people up a trail. We did ask some fellow hikers, at first finding newbies like ourselves with the same question. Finally, we got confirmation from a group of women coming down the trail that we were in fact on the correct path.

Rated a ‘moderate’ trail,  Merideth and I quickly decided that this must have a different meaning in Utah. The 1,100 foot climb followed a rocky, steep, rain gullied track. Frequent stops to catch our breath were rewarded with ever higher sweeping views of the Salt Lake Valley. Luckily, it was only after a little over a mile of climbing until we reached our goal.

The Living Room is so named for the chairs people created from the numerous rock slabs that litter the hillside. Maybe a dozen in number – I didn’t actually count – Merideth grabbed one of the few remaining and sat down. We relaxed with our fellow hikers and dogs as we took in the panoramic view of the valley. With the Great Salt Lake in the distance, we overlooked the seeming quiet calm that was Salt Lake City on a Saturday morning.

While the ascent was tiring, the descent provided its own challenges with every step an opportunity for a twisted ankle or a knee scraping fall. Much quicker than the climb, we were soon back where we started with all joints still intact, which was important as Merideth and I still had 3 miles to go before our first beer stop.

As  I promised Merideth, it was all downhill as we crossed the quiet campus of the University of Utah. I lingered for a few moments at the Fort Douglas Military Museum peering through fence at the military equipment on display. Continuing on, we passed through the fall leave covered neighborhoods between campus and downtown.

Approaching six miles into our hike/walk, we finally reached, much to our legs’ delight,  level ground. And more important, we arrived at our first brewery, Desert Edge Brewery & Grill. Located in the upscale Trolley Square shopping complex, I successfully navigated Merideth through a mini craft fair to find the brewery opposite  of where we entered the building.

We grabbed a table with nice a nice cushiony bench and soon had menus in hand. Worried that any hesitation on our part would have the waitress tell us she would come back, we quickly perused the beer list and ordered a much needed beverage.

Soon we had beers in hand, a Happy Valley Hefeweizen for Merideth and Pub Pils for myself. That first gulp of a nice, clean, crisp Pils really hit the parched spot. With a little less urgency, we both  ordered pork tacos for lunch.

Before our legs got too jelly-like, we finished our second beers and lunch and pressed on. Good news was all of the hard work was done for the day. The distances between the subsequent breweries would range from a little over a mile to a few hundred feet.

Passing the City Center then turning down Broadway, we soon saw the big brick facade of  Squatters Pub Brewery.  Entering the double doors, we found a bustling pub. Merideth sidled into the one available seat at the end of the bar. I took a standing position next to her.

Our visit  had to include Salt Lake City’s first brewpub (second in Utah). However, I thought this was more  a sentimental stop as I wasn’t sure they still brewed at the brewpub. It was my soon-to-be-found-incorrect understanding that all the beer was brewed at their separate Utah Brewers Cooperative production facility. If true, we would not be able to count Squatters on the List.

First sips into our beers, Polygamy Porter on Nitro for myself and French Saison for Merideth, we asked our friendly bartender whether they still brewed at the this location. She enthusiastically replied “Yes” and helpfully added that the Saison Merideth was drinking was brewed in-house. Taking a gulp from Merideth’s beer, we both officially added Squatters to the List.

Our next stop, Red Rock Brewery, was around the corner from Squatters. Gassed after the .1 mile hike, we joined the Saturday afternoon college football crowd at the bar.

Going into this trip, I had little exposure to Utah beer except for the California-distributed Uinta. Just short of a half dozen breweries into our trip (we had visited three the prior evening), I was pleasantly surprised by the depth and breadth of styles offered in the beehive state capital. Most enjoyable to me was the large number of quality lager beers we found.

This experience continued at Red Rock. Merideth and I both ordered and appreciated the draft German Pilsner, a bright and crisp lager. Even as a hophead and IPA guy, I get more excited about finding a well-crafted lager than I do with my go-to style.

Approaching dusk, we embarked on our last real leg of the day. Skirting the city center, it was just under a mile and a half to our next to last brewery stop and probably most anticipated, Epic.

Like many first time beer travelers to Utah, we probably held a few misconceptions about state’s beer laws. The only oddity, if I can call it that,  we encountered in our brewery visits up to this point was draft beer had to be under 4% ABV (over 4% had to be served from a bottle). Given the number of breweries on our target list, we appreciated this particular aspect of Utah liquor law.

No big deal. We accomplished the more difficult part, sitting,  which was somewhat an achievement in the tiny tasting room. But, at first, Merideth was adamant that she wasn’t hungry.  Really? Took a bit of convincing but I finally got her to order a meat and cheese plate. I ordered the grilled cheese accompanied by a bag of Cheetos, Food ordered, we could now drink beer.

Epic was the big anticipation stop of the day as I had a number of people tell me they thought it was the best brewery in the city. At first, Merideth and I ordered a glass, Fest Devious Märzen for her, Hopulent IPA for myself. But noticing the sample prices, most under 50 cents, we quickly switched to ordering the tastes to enable to try more beers.

True to form, I sampled pretty much everything that said IPA. However. we sampled a wide range of beers, tasting Saisons and fruited Belgian-style ales. I did enjoy their IPAs, especially the Hopulent, but my star was the Elder Bret Saison, a collaboration with Colorado’s Crooked Stave.  Merideth’s star was the aforementioned Märzen.

Epic was living up to the pre-visit hype and there was plenty more beers on the list to try.  But we still had one more brewery to visit so we called it quits. Taking our check from our bartender,  we quickly perused the bottle shop for our favorites.  Grabbing a couple of bottles for home, we checked out with the cashier.

Be sure to ask the bartender what beers they like. Tips can be their bottles as well as cash.

Leaving Epic after nightfall, Proper Brewing, our last stop, was just on the block over. Proper was hard to miss as the name was painted in building-sized letters on the front.

Our original plan was to eat at Proper, ordering from their sister burger place located next door. But the unexpected meal at Epic changed our plans. With only beer to consider, I quickly ordered Hopspital IPA so I could drink a beer while further perusing the beer menu.

The beer I found on the menu,  a “beer-of-the-trip” candidate, was their Idaho Pale Ale. Made with ingredients sourced from their neighbor to the north, I did entertain the idea that the beer had potatoes. It didn’t. What it did have was the suddenly popular Idaho 7 hop that seems to be making the rounds of all the hoppy beer brewers. The Pale Ale had the big tropical notes that is characteristic of the hop. Unfortunately, Proper did not bottle Idaho Pale Ale so I wasn’t able to bring any home.

Despite being our last stop, my internal beer hike clock told me we couldn’t spend all night at Proper. It did sound like a grand idea but we had a flight home  in the morning. Finishing my second pint of Idaho Pale Ale, Merideth and I called it a day.

We entertained the idea of walking the two and half miles back to our hotel but decided that would be overkill. Instead we took advantage of a free trip from one of those ride share services.

A hike with breathtaking views, five breweries, nine total miles. A great way to introduce ourselves to the Salt Lake City hiking and brewery scenes. That is a Hike-n-Urban Beer Hike.