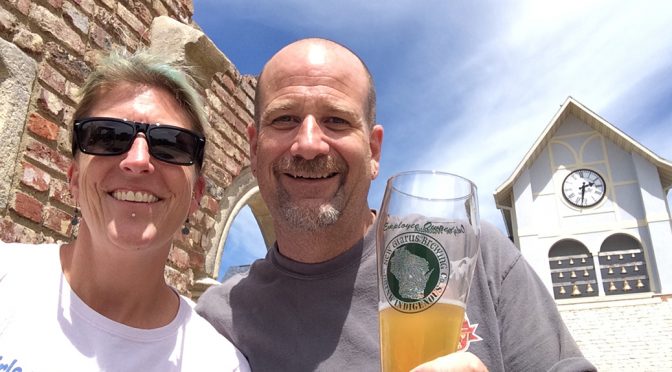 A part of life is friends moving away. Merideth and I were reminded of this recently when some good friends relocated to Minnesota. First feeling depressed, then resigned, Merideth and I turned disappointment into opportunity and booked a beer trip to the Upper Midwest.

Merideth and I felt a bit bleary-eyed when we landed in Minneapolis just after 5am on Sunday morning. Grabbing a quick cup of coffee, we bundled in our rental car and headed east towards some dark, menacing clouds on the horizon. Our destination was Chippewa Falls, Wisconsin, the home of Jacob Leinenkugel Brewing Company.

After just under two ours on the road, it was reassuring to see a water tower with Chippewa Falls in big block letters.  Our first task  was to get breakfast.  Entering the old school diner, Chippewa Family Restaurant, we definitely got the ‘you’re not from around here’ look. Despite this, we figured we were in the right place as every other customer was greeted  by their first name upon entering. The service was quick and friendly, the coffee bottomless and the eggs and polish sausage hit the spot. We were ready to conquer our first ever beer travel day in Wisconsin.

Not quite. Still an hour to the opening of Leinie Lodge, the brewery’s visitor center, we took a quick half hour nap in the car followed by a walk along picturesque Duncan Creek.

Returning from our walk a few minutes before 10am, this otherwise deserted sleepy town suddenly buzzed with cars. Thinking that we were going to be the only people drinking beer at 10am on a Sunday, all these cars had a singular destination, the Leinie Lodge parking lot.

When the doors opened, there were about 20 people waiting to get in. Just wanting to have a beer, we bypassed all the people lining up for what I thought was the tour signup and bee-lined straight for the bar. We quickly learned our first lesson of Wisconsin beer travel. We couldn’t just a buy a beer at the bar. We needed to go back and purchase one of the tasting/tour/glass packages. Deflated, we went back towards the entrance and joined the back of the line.

Surviving the five minute delay, Merideth and I headed back to the bar with our wristband and tasting glass in hand.

Visiting Leinenkugel had a special place in our heart. In 2008, our local paper ran an article about our beer adventures. From the article, I received an email from Jim Leinenkugel, who lived nearby. The great grandson of the brewery founder, he wondered if we wanted to meet for a beer. Over beers and stories about the old days, we became friends. Sadly, Jim passed away in 2014.

We toasted our friend Jim with Leinenkugel Original, their classic old school golden lager inspired by the family’s 1867 recipe.

With my second beer, I ordered the India Pale Lager. Hopped with two popular varietals, Citra and Mandarina Bavaria, I’ll admit I was surprised to see Leinenkugel doing an IPL.  The beer was quite good. Similarly, Merideth follow up beer was BeerGarten Tart , Leninkugel’s take on a Berliner Weisse. We agreed that it was the closest re-creation of the style this side of Berlin.

On return home, I learned that Jim was buried in the family plot in Chippewa Falls. Visiting him would have completed our trip to Leinenkugel. I guess we will need to return to Wisconsin.

In our years of beer travel, the biggest change, besides the sheer number of breweries, is the advent of technology, especially GPS. While reaching a brewery became much easier, the journey at times can be confusing. In the old day of paper maps, we saw the beginning and end in one picture and for the most part knew where we were along the way. Today, with GPS, the understanding of the journey has diminished, we know our present position and the next turn, but lose the big picture.

This came into play in our three hour drive from Chippewa Falls to New Glarus. Clearly driving down every two lane highway, passing every dairy farm and small town in Wisconsin, Merideth and I both worried silently that technology would lead us off the edge of the earth. Or at least we were not on our way to New Glarus, WI. It wasn’t until the last five minutes of our long drive did we breathe a sigh of relief as we passed a road sign that read New Glarus. Our destination was seven more miles down the road. At that time we confided in each other the feeling we were lost.

As we wound up the road to New Glarus’ hilltop brewery, I’ll admit I didn’t know what to expect. Reaching the parking lot, what appeared before us was quite outside the realm off all expectations. Thinking we were visiting a smallish Wisconsin brewery, we in fact had been transported into a re-creation of a small European village. As we walked up the path into the central courtyard/village square, we could see two men blowing on Alphorn to complete the feeling that we had accidentally drove to Europe. Stupid GPS!

With one Wisconsin brewery under our belts, I wasn’t going to act like a rookie again. Merideth and I walked up to the ticket booth and purchased our glass and taster tickets like we were Wisconsin beer travel veterans. However, as the wrist band was being placed around my wrist, I couldn’t resist asking if I could start a tab. The response was a friendly “no” with a gentle tone that acknowledged my lack of experience in the state.

Properly banded, glass and tickets in hand, Merideth and I grabbed a couple of beers from one of the several beer stations and sat ourselves at a table on the edge of the courtyard in the sun.

One of our worries about this trip was humidity and the effect it would have on our delicate California constitutions. But the rainy weather that we had experienced earlier in the morning had produced a very pleasant afternoon to drink beer.

New Glarus is one of those larger than life brewery names for beer travelers. Our previous experience with New Glarus was  drinking Raspberry Tart at home in California.  We explored their unknown beers with a bit of excitement. The famous Spotted Cow, Moon Man Pale Ale, the two lagers, Two Women and Totally Naked, and finally Bubbler, a Hefeweizen, were tasted.

After a sample or three, we decided to explore the grounds. There were a number of paths that took us to faux ruins and various seating areas. The only reference I could think of was Stone’s World Bistro in Escondido; completely different except both were make believe lands.

As we traveled back down the winding drive, I felt a great deal of beer traveler satisfaction and accomplishment.  We finally ticked off New Glarus.

Merideth and I finished up our afternoon in New Glarus with a round of golf at Swissland Minature Golf. A challenging course aptly themed with a wedge of Swiss cheese obstacle on the tenth hole was made a bit more difficult by standing water on a couple of holes.

It might have been the jet lag or the distraction of cute goats but Merideth did not have her A game. I took control of the round early with a hole-in-one on the par three third and never looked back. An ace on 17 was too little too late for Merideth as I cruised to a five stroke victory.

On a day that began with a midnight departure from Phoenix airport, we finished up with dinner at Vintage Brewing, a brewpub in Madison, WI. The following morning, we would be off to Iowa.

View all of the Wisconsin pictures