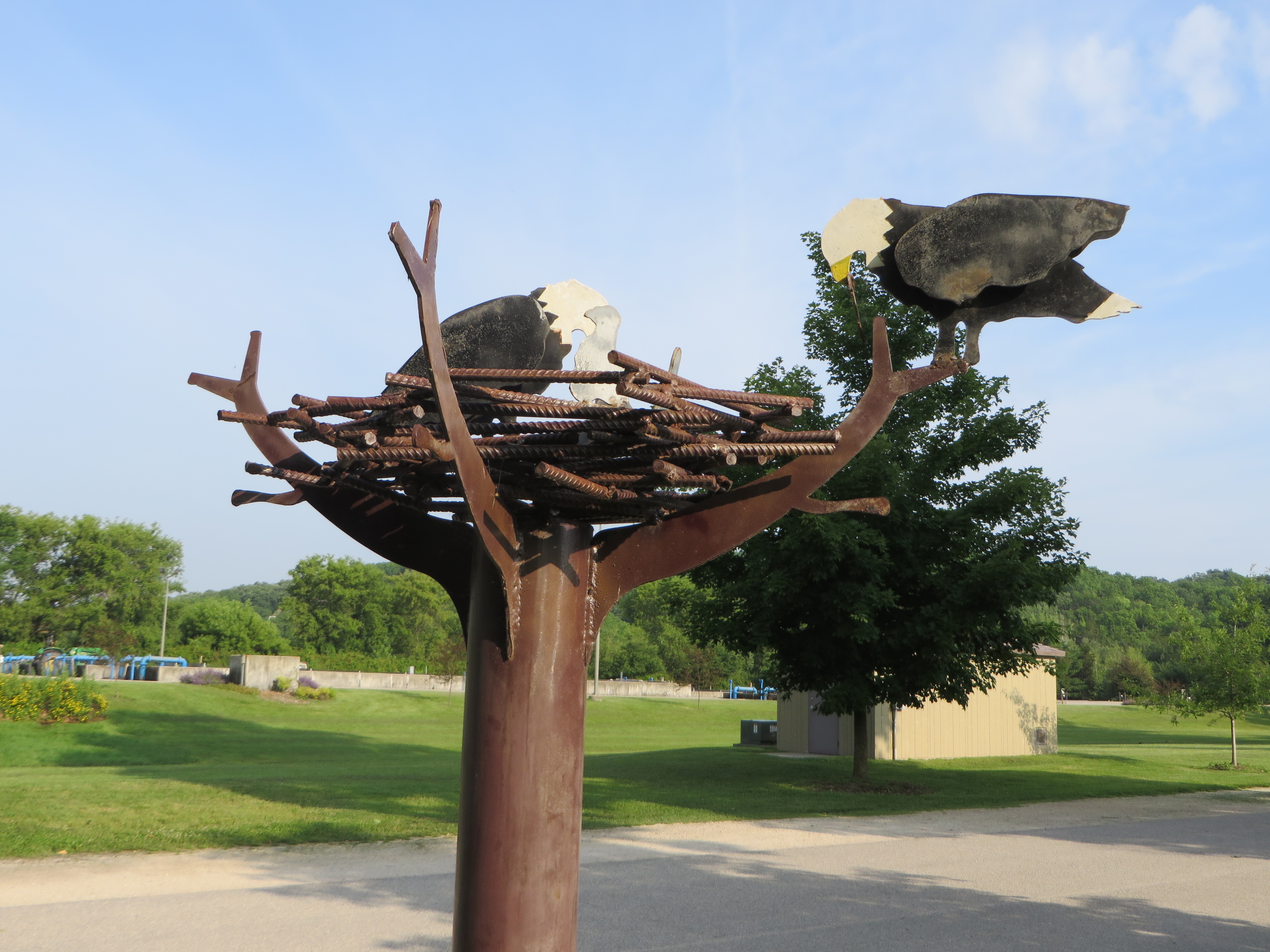 Waking up in the Madison suburbs on the second morning of our trip , one might think  exploring the bustling beer scenes of Madison or Milwaukee was next on our itinerary. But no, we had other plans. Merideth and I were headed to Decorah, Iowa.

Visiting Decorah wasn’t a completely random choice. Our good friend Renee was born and raised in Decorah. After years of  hearing stories of this magical place,  we took the opportunity of being somewhat in the neighborhood to experience it for ourselves.  The fact that Decorah had two breweries added the beer to our travels.

Crossing the mighty Mississippi River at Praire du Chien into Iowa, our first  visit to the Hawkeye state officially began.  We pressed on through the rolling hills of mid Iowa and reached Decorah late morning.

With only two breweries to visit, we had plenty of time to  explore our friend’s hometown. Walking down the street in small town middle America made me feel I had been transported back to an earlier, simpler time. A feeling reinforced by the fact that we had no cell coverage so had to rely on a paper map for navigation.

Merideth and I  strolled along Water  St., the main drag through downtown Decorah. Well-known for its Norwegian heritage, we popped into the Vesterheim,  the national Norwegian-American museum and heritage center. Usually on a go go go schedule, I am sure Merideth felt a bit odd being allowed to wander around the gift shop.

The not-for-Californians heat and humidity we expected on this trip was in full force. Lucky for us, first on the agenda was the Whippy Dip, an old school ice cream stand on the edge of the downtown. Coached by Renee, we already knew what we were going to get, the Peanut Butter Cup “Tornado”, ice cream topped with candy. What she failed to mention was that they were HUGE. Per usual for us, Merideth and I each ordered our own. That first teeth numbing bite of ice cream took the edge off the swelter.

Continuing our walk, we crossed the Upper Iowa River and reached what could be called the town’s “brewery gulch” (brewery quarter?) since both are located just across the span.  Still needing time to finish our massive ice creams, we bypassed our planned first stop, Toppling Goliath, to check out Dunning’s Springs, a 200 foot waterfall located just down the street from the brewery.

Passing the family picnicking at the base of the falls, we climbed the set of stairs to take us to the top.  The rushing sound of cascading water accompanied the scraping sound of plastic against Styrofoam as we attempted to power through the  ice cream.  With the stairs ascended and descended, ice creams in different states of completion, communing with Iowa nature was complete.  We were ready for our first ever Iowa brewery visit.

Founded in 2009, Toppling Goliath  quickly built a national reputation for their hoppy and barrel-aged beers.  Through our Decorah connection, we were familiar with one or two of their offerings.  However, the excitement of visiting this highly rated brewery wasn’t necessarily the opportunity to try their full lineup of beers, rather the promise of air conditioning. We lingered as we entered, enjoying the surge of cool air before moving up to the bar.

A  sample flight of seven beers in hand, our next decision was where to sit. The taproom had an invitingly spacious, trellis-covered, hop vine-lined patio that normally would have beckoned us. Most of the customers chose that route. But, we had plenty more of the day to experience hot and humid so chose comfort of the air conditioned bar area.

The flight ranged from Dorothy New World Lager, a California Common to Seltford Stout on the dark end. Living up to their marquee “we brew hoppy here”, four of the five in between highlighted my favorite beer ingredient.

Merideth, true to form, liked the Dorothy. The star for me was always going to be PsuedoSue. And as we heard the bartender explain to every customer, I was treated to a special version dry hopped with Galaxy.  A big fan of the citrus/tropical fruit notes of Galaxy, I enjoyed a pint or two (maybe three) of PsuedoSue.

With a few pints under our belts, we decided to leave our air-conditioned  sanctuary and set off for further adventures.

Decorah is ringed by a 11 mile paved path, the Trout Run Trail, which is an excellent springboard for explorations of the area.  With a few more hours until the second brewery, Pulpit Rock, opened, we continued our trek along the section of the path that runs along the  Upper Iowa River on the north side of downtown.

Here the path follows the wide green flood plain banked by levees on each side of the river. Hiking into the bluffs in Palisades Park, we tried to get a panoramic view of the surrounding countryside. Unfortunately, all we could see were the tress that lined the trail.

Returning to brewery gulch early evening , we found Pulpit Rock already hopping for a Monday. Or what I imagined what a hopping Monday night looked like in Decorah.  While Pulpit Rock’s outdoor seating appeared perfect people watching location, we again selected the cool, air conditioned bar.

Grabbing seats at the bar, we ordered a sample flight. A few sips into the first sample Preikestolen, a Blonde Ale, lo and behold, Renee shows up.  Thus, our visit to Pulpit Rock became less about the beer and more about catching up with our friend.  Letting her know how we got along in her old stomping grounds, Merideth and I almost felt like locals chatting with Renee.

I did enjoy  their IPA, Saftig. But my go to was Loopy Lynn, their hazy, Citra and Eureka hopped Double IPA.

Renee was kind enough to give us a quick driving tour. We were able to get our panorama view.

The following morning, we still had one more culinary item on our Decorah tour,  the  best cinammon roll in Iowa. The purveyor, Ruby’s, was conveniently located only a block from our hotel and I was waiting at their front for their 7am opening time. Not learning the Whippy Dip lesson from the day before, I excitedly ordered two of the frosting laden treats.

Bready, gooey, sticky deliciousness! For the second day in a row, a sweet treat was too much for Merideth. I, on the other hand, finished mine.  And maybe Merideth’s.

Shocking to believe, there is more to Decorah than ice cream, beer and cinnamon rolls. In 2007, the Raptor Resource Project set up a webcam overlooking a Bald eagle’s nest on the outskirts of town. Four years later, the live stream of the daily activities of the adults and their eaglets became became the most watched live stream ever. So well known, when Merideth told a local friend we were going to Decorah, she assumed we were going to see the eagles.

Hopped up on loads of sugar, Merideth and I drove to the fish hatchery to find the famous Decorah eagles. Described in the local tourist map as being across from the hatchery, we parked at the small visitor-looking center opposite. Merideth and I wandered around the area trying to find the eagles. No luck.

Knowing we had an over four hour drive ahead, I was ready to give up.  Merideth not quite ready to throw in the towel, suggested we cross the main road. And there it was right along Trout Run Trail. High up a tree, Merideth pointed out a huge mass of sticks that made up the nest. Not something we normally see, spying the two eaglets sitting near the nest put a exclamation on the short amount of time we spent in Decorah.

We only lingered a few minutes watching the eagles. Then it was back in the car and on the road to explore another new state.

View all the Iowa images