Our plan is for both of us to reach the 500 brewery milestone on our upcoming trip to Maine. But with Merideth needing ten breweries to reach 500 and only 11 on our Maine target list, we needed some trip insurance. To give us a margin of error in case something went wrong, we decided we needed to add a few more breweries to The List prior to the the trip.

An evening kickoff for the Cal-USC game gave us the perfect opportunity get up to the Bay Area early in the day and get us the needed wiggle room on the beer list. So, at 8am on Saturday morning we were on the road to eastern Contra Costa County.

People are surprised to learn there are breweries in the Bay Area that are not our list. In the case of Schooner’s Grille and Brewery in Antioch, which opened in 2001, the issue was geography. Antioch is just not on way to anywhere we ever go.

Not knowing exactly how long the drive would take us, we pulled into the Schooner’s parking lot 25 minutes early. After a few minutes hanging outside in the warm late morning sunshine, the manager, Gary came out to say that they wouldn’t be open for a few more minutes. Explaining that we had driven 2+ hours to get to Schooner’s he kindly set us up with a taster set out on the patio. Joined by our friends Rowdy and Dave, we settled in to try the beers.

The eight samples ranged from a popular American-style light lager to their award winning Oatmeal Stout, which recently won a medal  for the third straight year at the Great American Beer Festival. While the Stout was really nice, I gravitated towards the Pale Ale and IPA. Both were hopped just the way I like them. Merideth liked the Pale Ale the best, as well.

Despite enjoying the beers, company and sunshine, we needed get back the road for the hour drive to Oakland. We had an appointment at Linden Street Brewery.

Linden Street first came to our attention when Bill Brand started writing about a new brewery in Oakland that was making a California Common. More than the beer, what intrigued me was the Friday night party at the brewery that was almost reaching legendary status.

We first met Linden Street owner/brewer Adam Lamoreaux in February 2007 at the Trappist in Oakland. It was somewhat a chance meeting as the Trappist was packed after the Celebrator party and Adam happened to be sitting next to the only seat available. Despite the loud and boisterous crowd at the Trappist that night, we chatted with Adam and tried his flagship beer for the first time. The pride he took in Oakland struck a chord with us. As seven year residents of Oakland, we look back fondly on our years there. Fast forward 17 months and many delays, Linden Street was finally brewing at their Port of Oakland facility.

Located in a 1890s era warehouse, the old brick building just exudes character. Adam greeted us in the craiglist free page furnished front room. After a short chat where we reminding him of our 2007 meeting, Adam guided to the back and the brewery, the old Bison Brewery kit.

There are two beers in the current Linden Street lineup. Merideth’s favorite, Urban People’s Common Lager, was the beer we first tried in 2007. A California Common, this is Adam’s interpretation of a brew that was prevalent all over the Bay Area in the 19th century.

My choice of the two was Burning Oak Black Lager, a beer that Adam described as actually a brown lager.  “A really, really dark brown lager. So dark brown, it almost looks black,” Adam said. I just love the roast flavor of a black lager.

Adam’s passion to  bring Oakland back to its glory days of brewing – the days when there were over 40 breweries in the city – is admirable.  What impresses me more is that in these times of IPAs, Doubles, Imperials and barrels, Adam is committed to brewing lagers.

The passion must be working because the Linden Street brews are selling well. Two new brews are in the works including the recreation of a old time Oakland brew called “Moon Glow”. Other, bigger plans, are also in the works. After we met Adam the first time, we wished him all the success in the world. It is nice to see that success is now coming to Linden Street Brewery.

We had the Cal game to get ready for so we left Adam to move on with his day.

A day that was originally conceived to add a couple of breweries to The List turned out to be one of those days that reminded me that our brewery quest is about more than numbers. It is the beers that we drink and the people we meet that give it all meaning.

Our Sierra Nevada Beer Camp beer, Nuthin’ in Common, is finally available at select locations in Northern California.  And I do mean ‘select’, as in we selected them. We chose three locations and some fellow Nor Cal campers from Petaluma will serve it at their place, McNear’s. Below are the dates that this special brew will be tapped at our select establishments. The list times are when we will be hanging out at the location. 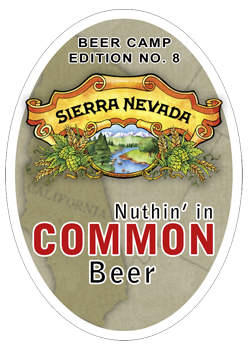 Nuthin’ in Common was the first California Common ever brewed at Sierra Nevada. But our version is aggressively hopped, with Cascades and Hallertau Magnums in the brew kettle and  Southern Hemisphere and Hop 393 in the dry hop. It came in at 6.6% ABV with 45 IBUs.

Here are a few notes from Sierra Nevada brewer Scott Jennings:
“It has a sweetness to it, nice subtle malt note in there, but the nose is dominantly hops. The dry hopping made it really interesting…a beer that is normally not hoppy has a very nice velvety hop character… Very pine/myrcene, but also quite fruity. You can feel the alcohol warmth but for it’s strength it is very drinkable. Not at all like any steam beer you’ve ever had guaranteed! Very bright, a nice sunset color, good foam.”

Hope you can join us one of these dates!