Since a love of craft beer is something that Chris and I developed together, my story is very much the same as his. But here I’ll add a few more details about my experience of becoming a girl beer geek.

My interest in beer started in the late 1980s when a pub called Raleigh’s opened up in Berkeley. I was not yet legal drinking age, but even so the craft beers served at Raleigh’s piqued my interest. At that time, Chris and I were already moving away from mass produced beer and Sierra Nevada—complete with yeast at the bottom of the bottle—was frequently found in our fridge at home.

Our growing taste for craft beer received a boost when, in 1991, Barclay’s Pub & Restaurant opened in our Oakland neighborhood. Twenty-eight craft brews on tap all within walking distance of our apartment! And lucky for me, I was now legal drinking age.

We immediately became regulars and spent several evenings a week in Barclay’s. It was (and still is) a neighborhood pub where neighbors gathered for a relaxing good time. It brought our community closer together. Within two years, I started working as a waitress at Barclay’s. As a novice craft beer drinker, I soon realized that knowing 28 different rotating beers was a difficult task. I wanted to be knowledgeable about beer and able to make recommendations when customers asked. Chris and I decided that the best way for me to get to know the beers was to go to the source—the breweries themselves. That’s when the beer travel started and we haven’t looked back since. 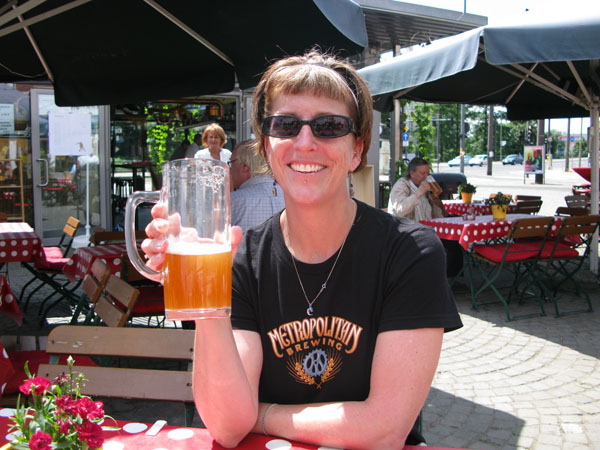 In the early 1990’s, few people were craft beer experts. Practically everyone was a student learning about this new thing we called “microbrews.” At that time, women craft beer drinkers were a very small minority and the prevailing assumption was that women didn’t know anything about beer. As females, we weren’t expected to. Craft beer was a man’s drink. I felt I had a lot to prove in those early years to show that I was a real beer drinker. Over time, females have become more and more integrated into the craft brew culture as brewers, judges, critics, and of course, drinkers. Today, there are a whole host of women out there with loads of beer and brewing knowledge and I no longer feel the need to prove myself. I may not know as much as some women, but I know of no other female (and only a handful of men) who has the experience of visiting 1,000 breweries. I consider myself much more than a craft beer drinker. I am a beer traveler.

I am also now an author. In May 2012, Teachings From The Tap: Life Lessons From Our Year in Beer was published. It chronicles the adventures of our 2008 Year in Beer. As a travelogue, guide, and story of self-discovery, the book aims to help readers experience the excitement and adventure of beer travel and inspire them to discover their own beer adventures. As the first beer travel book authored by a woman, it’s a great reminder that girls are beergeeks too!